Il Castelletto fits with class into the long tradition of Milanese hospitality for business or wellness stays.

Spaces and Services have been conceived with skilful elegance, offering its customers a wide range of comforts deriving from hotels, restaurants, the world of relaxation and entertainment: multifunctional structure with 85 rooms, restaurant and pizzeria, wellness center, outdoor swimming pool , garage, meeting rooms and slot & poker room.

Il Castelletto presents itself as a dynamic and versatile reality, a space to be lived in as a natural and prestigious location for events, special occasions, relaxing weekends on the outskirts of Milan.

Come for business, stay for leisure!

… To Delio and Fausta who, with so many sacrifices, built your “big house” one piece at a time.

Delio Chinosi, the current owner of “Il Castelletto” who has managed the property since 1975, preserving a family atmosphere where guests always feel at home. Originally from Piacenza, hence his warm and friendly smile, educated from an early age to good food and the art of good wine, after attending the hotel school, he decides to move to London where he lives his first work experience in some restaurants Italians and foreigners. In the early 1970s, Delio embarked on cruise ships headed for the Caribbean sea and, perhaps, it is this rich experience that will contribute to enrich his professionalism; it is in fact, from this look on the world that he begins to design his own restaurant in Italy that was not just a restaurant but had multiple functions, in the wake of foreign tourist structures.

1975: From the beginnings to Celebrity Nightclub

In 1975 Delio Chinosi returned to Italy, settled in Binasco and took over “Il Castelletto”, creating in a few years a loyal and faithful public to his cuisine. The Castelletto was certainly not as we see it now, but only made up of 35 rooms, a restaurant, a bar and a nightclub. In 1985, with a view to development, Delio renewed the structure by increasing the capacity of the Hotel by now insufficient and renovating the Celebrity Disco which soon became a reference point for the Milanese nightlife, a Disco with an exclusive Dinner Club inside that it has hosted events, sports personalities, entertainment and DJs from the most renowned radio stations. See Gallery

Until 2005, when Delio Chinosi begins to give life to an ambitious project for the multifunctional extension of the structure that will crown a heartfelt evolution aimed at satisfying the increasingly qualified needs of our customers. In recent years, the 4th star of the hotel has been celebrated following the total renovation of the premises and the expansion, passing from 35 to 85 rooms including 15 themed suites. A completely new location for the restaurant that has been expanded, with the capacity to host large events up to 250 seats, with a renewed catering service also flanked by the Pizzeria. Also new is the Meeting Room for 50 people inside the main tower, a gem for its 360 ° view over the Lombard plain. To complete the multifunctionality, an area dedicated to Wellness has been designed, the Celebrity Spa. The new wellness oasis, located in the tower, on the third floor of the Hotel “Il Castelletto”, equipped with a spa path with Sauna, Hydromassage and Turkish Bath, exclusive face & body treatments, advanced aesthetic technologies, Fitness Area and panoramic swimming pool on the Roof Garden . A tense structure was then created on the fourth floor, glazed and heated, very elegant with white ceiling drapes suitable for hosting large weddings and corporate meetings.

Thesis in search of authentic flavors and out of the desire to preserve family traditions, we would like to inform our guests that the seasoning of cold cuts (Culatello, Pancetta, Salame) and the production of pure honey, takes place directly in the Chinosi sui Colli Family Court Piacentini in Obolo (PC). 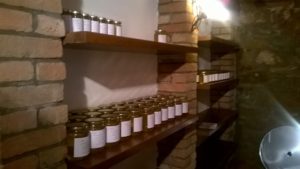 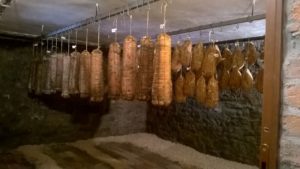 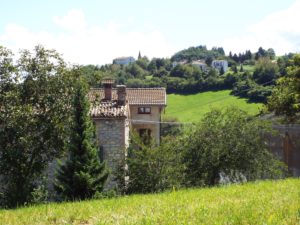 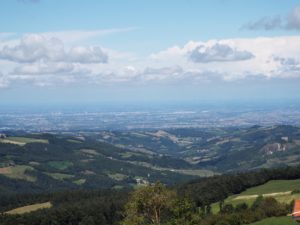 Where does the name "Il Castelletto" come from?

The first ancient and documented information related to the history of the Castelletto, date back to the early twelfth century: it is from these sources in fact that it is assumed that the name “Castelletto” derives from the one that originally bore the portion of the territory on which it stands. From meticulous and careful historiographical research concerning the area we read the following: “Among the localities of the Casarilese, the one that appears to be among the oldest is Castelletto, which in the 12th century was probably an autonomous community that resided in a fortified village. This statement is corroborated by a document dated 8 May 1129, in which Bernardi, bishop of Pavia, to preserve the communities that arose near the border of his diocese unharmed from possible attacks by the Milanese armies and, at the same time, to defend the Pavia territory, orders to repair and keep the tower of Castelletto, if it requires repair, (…), as well as the tower and the curtain wall of the castle of Binasco. More than a real castle, a “fort-house” had been erected in Castelletto with a tower by the Pavesi to have a sort of outpost in the sector of the “common lands” which were often the scene of bloody battles between the imperial armies. , supported by the armies of Pavia and those of the free municipalities led by Milan (…). In the Middle Ages, Castelletto was a center inhabited by people who not only worked as settlers of the Pavia monastery, but who also carried out free activities. ” Taken from: A.M.Cuomo, “Casarile: history of a town in the Milanese province”, Motta Visconti 1998, p. 26-27. It should also be noted that during the Middle Ages, Binasco became the center of the Milan-Pavia axis. Its importance grew considerably when the Viscontis strengthened the communication routes, to better connect the two cities in which they occasionally had their residence and thanks to these improvements, the village became an obligatory passage for travelers who were heading from Pavia to Milan and vice versa, for commercial reasons. Binasco with its many inns (called at that time “hospices”) and inns offered refreshment and overnight accommodation to travelers who came from afar transported by their horses and mules. But it is only since the early 1940s that the current Castelletto is known as a structure dedicated to hospitality in the form of a simple inn with a trattoria. However, it acquired its original form of “small castle” only later in the early 1960s, when the owners of that period thought of redeveloping the old inn taking inspiration from the name of the historic town. Il Castelletto will pass only from 1975 under the careful management of Delio Chinosi as a Hotel, Restaurant and Disco.

The 45th anniversary of the activity of our company is in 2020. Company and we are happy to give a thought to those who have taken part in its history. In fact, the Hotel Ristorante Il Castelletto turns 45: a beautiful milestone to celebrate with our staff and our guests. 45 years of focused goals, choices and sometimes daring changes; 45 years of constant commitment and many satisfactions which, however, we want to consider this anniversary as just one stage of the path we have undertaken, convinced that there are many others to be achieved, with the same enthusiasm and tenacity that motivated us from the very beginning and that have allowed us to get here. A special thanks goes to all those we had the honor of hosting: many people who over the years have become regular customers and in many cases real family friends. Guests for whom Il Castelletto has become a reference point for important occasions and the setting for their most important events. An important milestone that we want to share and celebrate with all of you: present, past and future customers, collaborators and employees. What distinguishes us from the considerable competition from Hotels, Restaurants and Spas near Milan is that people have value with us and have never been numbers and we believe that the skill of our professionalism is not in perfection but in the ability to know solve every problem of a guest and understand his needs. We look to the future with enthusiasm, certain that this anniversary can become a new starting point. With regard, Fam. Chinosi

It’s Going to be Perfect!